Yeah, not what some of you might be thinking…

Let’s start at the beginning. We weren’t scheduled to arrive at Cococay until 10:00 am, so we did not rush to get up this morning, which was nice. When we did get up we learned the captain made excellent time and we had arrived nearly two hours early. We still took our time getting to the tender and it was nearly 11:00 by the time we got to the island. We remembered everything except cash with which to buy souvenirs from the vendors, but we still have time for that tomorrow. We found ourselves a couple of hammocks in the shade, pulled over a couple of recliners, and settled in. We chilled for a few minutes, Dan dozed, while the boys and I ventured for a walk down the beach.

The weather was spectacular: a light breeze, blue skies, calm water, roughly 22C temperature — gorgeous! Unfortunately the boys found it too hot and after grabbing some food for lunch they opted to crash in the hammocks while Dan and I went for a walk. We waded out into the ocean a goodly distance, not getting any deeper than maybe knee height until we stumbled into a little pocket that got up to our hips. There was no surf whatsoever. We could see lots of small and larger white fish all around, loads of hills and airholes (?) indicating clams below the surface, a large sea cucumber (?), and one small, long, odd-looking fish.

Upon our return to the boys, we found them sharing a hammock, head to feet, chatting away. We agreed to make our way back to the ship to use the pool there. I did manage to sucker them into a couple of detours on the way back to the tenders, first by following an iguana to take pictures then by suggesting another path that would take us across a bridge might be shorter (it wasn’t).

Back on the ship we parked on the pool deck for a bit, ate some ice cream, took a dip in the pool and whirlpool (22C is too hot, but the whirlpool isn’t???). Three o’clock rolled around and stand up surfing on the Flowrider started, so I headed over there with the boys. They opted out of giving it a try, Jarod because he just wasn’t interested and Zak because he still found it too hot under the sun and didn’t want to stand in line. But they stayed long enough to film my first two efforts. Is that ever harder than boogie boarding! The first time I managed to take the instructor out with me when I fell spectacularly. The second time I managed to stay up for no more than five or six seconds on my own. Now, this is where I’m sure some of you are thinking I’m going to say I managed to blow my knee out again, but you are incorrect. I managed to surf a third time and stayed up for nearly a full minute! The boys did not witness this spectacular feat as they had already left, but Dan did.

Dan and I then left for a quick snack before returning to the Flowrider so I could do some more boogie boarding and maybe try a 360. Alas, that was not to be today. Dan took a misstep when we got there and twisted his ankle. Nothing broke, but something tore. It swelled really fast. We put ice on it, had to report the accident, and agreed to wheelchair Dan to the medical facility to have it checked out. They gave him a tensor bandage to wear, told him to put ice on it when he could and to take ibuprofen, and if it got worse to go back to see them. Dan was good natured throughout, but was pretty embarrassed.

We still made it to supper at Wonderland, which was absolutely fantastic! The decor was themed to Alice in Wonderland. To see the menu we were given a framed piece of paper and a paint brush; we had to paint water across the paper to reveal the invisible words. The food choices were divided into five themes offering different ‘courses’ that we could choose from to build our meals. We could share them family style or choose individually. We chose individually, but ended up sharing much of it. I can’t even begin to describe the combinations of food available! They were weird, unusual, and absolutely delicious! And the service was top notch. They knew what they were serving and made excellent recommendations throughout.

Dan and the boys returned to our rooms afterwards while I attended a concert put on by Clint Brown. He performed a variety of pieces, including a few of his own — which I really enjoyed — and wonderful renditions of Wind Beneath My Wings, Mr. Bojangles, and Hallelujah.

Tomorrow is Nassau where we spend the day at Atlantis. 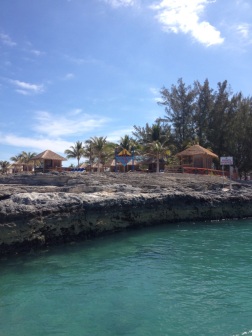 Pulling into the cove 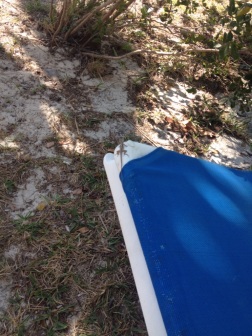 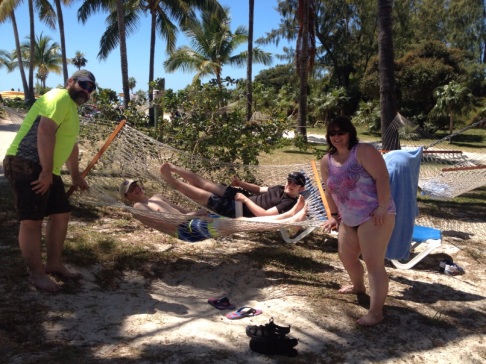 An iguana, imagine that on a tropical island 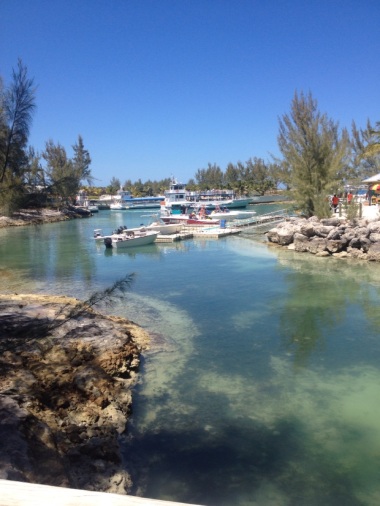