Our first full day on the water! We started by having a swim off the back of the docked boat, the kids using the water slides and water guns while the rest of us just swam around using inflatable craft, water noodles, and PFDs. The water was cold at the first dunk, but warmed up quickly. Compared to home (i.e. Back Bay or Long Lake), it wasn’t even really cold, just a little surprise. Dan, Jessica, Jarod, Leah, and I built an inukshuk on the beach to mark our visit – we named him Captain Kuppenbender. We ‘chilled’ like that for a bit then got everybody back on the boat and headed out on the lake towards another arm. We didn’t really plan much, but got through the Cinnemousin Narrows and randomly decided to drift to starboard into the ??? arm. We slowed to a crawl for a bit so the guys could troll out the aft (no luck catching anything) but eventually realized we didn’t really know how far we had gotten. We had to refer to GoogleEarth’s satellite view on Leah’s phone to figure out where we were. Once we did we decided on a place to aim for. We landed at Cottonwood Beach in time to put the BBQ beer can chicken on and to watch the Riders play the Stampeders. Of course Eddy and Dave had a bet going: if the Riders won Dave would serve Eddy drinks all day Sunday, if the Stampeders won Eddy would serve Dave. Well, the Stamps won, so…

Dave was the master of the BBQ beer can chicken and it is a well deserved title. It was sooooooo good! Half the chicken was rubbed with a rosemary-thyme-lime rub, the other half with a paprika rub. Both were fantastic. Served with potatoes and vegetables. Mm-mm-mm.

While the food was cooking the kids did some more swimming while Dan, Jessica, and I built another inukshuk to mark our new spot. The beach this time was less rocky and more sand/gravelly, but on each side were really interesting and varied rocks and boulders. We also found a little spiderman action figure amongst the boulders, which we decided to place on our inukshuk’s shoulders and hence the name of our inukshuk is Peter Cottonwood.

I spent some time on the beach with Anna cleaning pebbles (the sand/gravel of the beach) until supper was ready. After supper games of cribbage ensued for a time while the kids watched some space dog movie. Jessica and I tried to make peanut butter cookies (we had brought a massive 1kg jar of peanut butter, so there’s plenty to use). The oven didn’t really work the way we were used to though (it was gas, we’re used to electric), so half the cookies were half cooked well after they should have been fully cooked. Disappointing, but the cookies were still eaten. I think we’re going to try some freezer cookies tomorrow.

Jarod Skipping Rocks Yeah, he skipped so many rocks his shoulder hurt the next day… 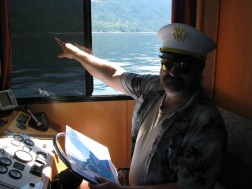 Cassie and her Silver Find 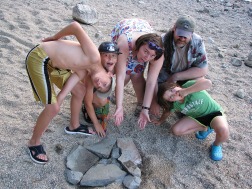 Panoramic view of the narrows