I had fun today! The boys took some work, but sort of came around eventually. Dan and I went on the bumper cars after breakfast. The wait in line was about an hour, but I’m not letting any long lines deter me from partaking of the things I want to do on board! I’d have more than a selfie in the car if the boys had been around to take pictures, but they understandably got distracted by foosball and ping pong.

While the boys then decided there wasn’t anything to do and went to be lazy in their room, I got huffy at them and went boogie boarding. AWESOME! I am totally doing that again! No pictures of it today; as mentioned, the boys were in their room, and Dan was enjoying a talk on navigating given by the captain.

We managed to coerce the boys out of their room to grab a sandwich for lunch and go looking for this card and game room that we heard is somewhere on the ship. We did find it, but it was pretty small and almost full of people playing dominoes, mahjong, and Chinese checkers. We played a game of checkers and then I had to leave for my iFly skydiving simulator appointment. The boys said they were going to play ping pong, but while I was waiting for my group to be called they showed up and Zak wanted to go too. Luckily there was still room in the group, so Zak and I got to fly together! Not literally at the same time, of course. What a rush! Both of us enjoyed that. And our group was being filmed by a Japanese film crew for a Japanese TV show, too. 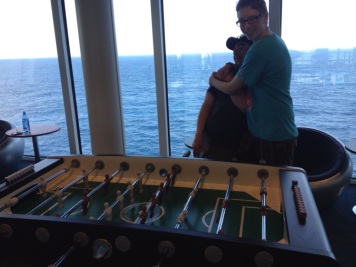 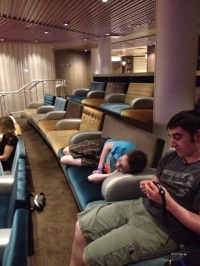 Zak in the chair 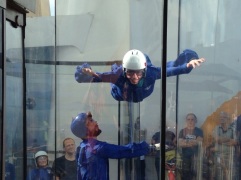