WELL… today was our first full day on board. First off, the breakfast was DELICIOUS!!! Then mum and me went to a Tuscan Pasta making demonstration. The pasta was really good. Then after that we went to this shopping thing….VERY BOORING! It was one long commercial. So we met up with Dad and Jarod and went to Johnny Rockets for lunch… It was filling. Then we went to the arcade. Woah. I won the claw game twice. (pretty good eh?) and one of the things I got was an Apu J. and won two prizes from Skittle Ball. Oh I also played the jump rope game in the arcade… I only got like 10 jumps, but I think it’s pretty good. Anyways. We went to a fancy shmancy restaurant for Grandma Claire’s birthday. I got the Caesar salad (Eh I spelled Caesar right) and then filet mignon… Yumm. Then we had birthday cake for dessert. After we came back to our rooms and found dog pillows with glasses on. I like the housekeeping… Their fun! Then we went to the pool…. Then I started writing this… so ya… dats it…Oh and I had Ben and Jerry’s ice cream. It was good. Oooh and we saw what we think is a buoy in the water… BUT WE AREN’T SURE! Anyway… see yaJ

Well, the waters did not improve as of this morning, but by mid-afternoon they were much better. It’s taking longer than I had hoped to get my sea legs. Even now, this late at night, the boat is starting to weave again making it hard to write this.

Started the day with breakfast buffet at the Windjammer Café. Very impressive spread. Jess and I went to the pasta demonstration while Dan and Jarod went to find the table tennis and go rock climbing. Apparently Jarod only made it half way up the wall, but I intend to encourage him to try again when Jess and I try it later this week. The four of us got together for a quick bite at Johnny Rockets before Mom and I met for our spa manicure/pedicure appointment. That was Mom’s birthday gift to me, even though it was her birthday today! It was really nice though and felt good to get done. Mom went to meet Andy after that, who was relaxing on the deck waiting for her, while I went to play bingo. I spent $32 and won $25. That’ll do.

While I was at the spa Dan and the kids played in the arcade and went shopping. I thought I saw a submarine while I was at the spa and called the kids on the walkie-talkies to go look, but it turned out to be a barge being hauled by a tug boat. I didn’t see the tug boat until after Dan and the kids went to see what I was talking about. Trust me, it was an easy mistake to make from the angle I was looking at it because it was painted the same gunmetal grey that a submarine might be coloured and the writing was similar white block letters, too. I did wonder at why there weren’t any nationality markers on it, though. Ah, what do I know anyway, right?

Supper was for Mom’s 60th birthday party at Portofino’s Italian Restaurant. Oh, my God, was it ever good. The service was exceptional, the food was amazing, the cake we ordered for mom was out of this world, and they still pushed us to take more dessert back to our rooms to consume later. I definitely have to get some exercise tomorrow!

We followed supper up with a short stop at our rooms where Andy gave Mom her birthday present. He intended to give it to her at dinner but forgot to bring it with him, so we did it in our stateroom instead. It was a lovely set of silver-grey freshwater pearl earrings. A very nice choice that he bought on the ship. After that we all went for a night time swim in the pools. It was really nice, and kind of odd as with the ship rocking back and forth the water in the pools would move with it like the tides being pulled by the moon’s gravity. I’d be swimming across the pool at a constant pace, but my progress would vary from a standstill to speeding forward. It was weirdly fun!

Anyway, we’re back in our rooms now and the boat is rocking again making this hard to keep up. We have to be up a little earlier than today tomorrow as we land at our first port, Labadee, tomorrow. Zip lines and Aqua park, here we come! 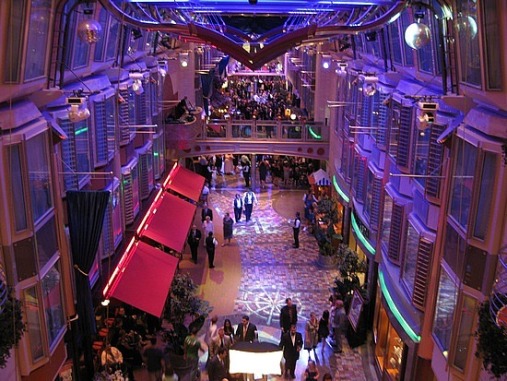 The Royal Promenade at Night 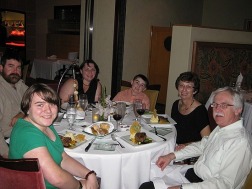 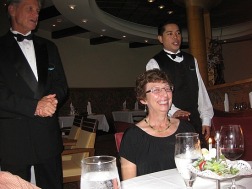 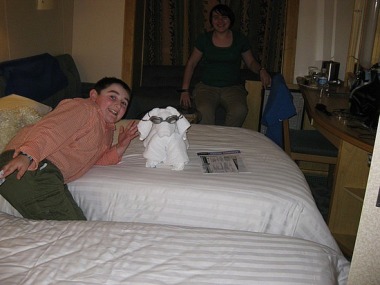 A towel gift from housekeeping for the kids.

A towel gift from housekeeping for us.

Looks like you guys are having a great time, keep up the adventure. From Marie McCarthy-Guigon, on Nov 3, 2009 at 05:52PM

Interesting blogs.There are several ways of promoting the business but, one of the effective methods of promoting is through classified advertisements. From lorence, on Jul 9, 2010 at 11:10AM