Well, we planned to go to at least five different places today. We ended up going to two (with one more to come). We missed out on going to Audible Presents podcast recording, and to the Scottish Photo Experience. Don’t worry, Martin, I’m sure we’ll find another opportunity for the photo experience while we’re here.

The reason we missed those things was totally worth it! We visited Hopetoun House and Midhope Castle. Both are owned and managed by a trust created by the Hope family.

Lord Hopetoun and his family still live in a wing of the House. The rest of the House is open to the public, and is magnificent! The House is considered Scotland’s finest stately home, and displays throughout it the history of the House and Hope Family.

They have converted the attached stables into a wonderful restaurant. They have a ballroom that is available for booking events. The original part of the House was built in the late 1600s and was designed by William Bruce. It was later altered and extended by William Adam. Both men were noted architects of their times, and have designed multiple buildings throughout Scotland.

The lawn appeared to be well-groomed primarily by the goats, which were kept in check by the Ha-Ha. Good luck Googling that. The Ha-Ha is what they call the stone-walled ditch separating the grounds from the access road. We got a kicked out of it.

Before I forget to mention, we did have lunch at the Stables Restaurant and enjoyed our first bowl of Cullen Skink. We’re old hats at haggis, now, but hadn’t gotten around to Cullen Skink. Turns out it’s just fish chowder. Really good fish chowder, but fish chowder nonetheless.

Outlander reference: the Paris street scene where Claire and Mary get in trouble, the room Mary is brought to at Claire and Jamie’s, the duelling scene, and the Duke of Sandringham’s room were filmed there, and the outside rear view of the house was used to represent the Duke’s residence. Oh, yeah, the existing stables were used for the Edinburgh brothel, the bowling green was where Jamie and Lord John Gray played chess, and the path where Geneva Dunsanay fell off her horse into a mud puddle was filmed on one of the paths of the forested grounds.

Midhope Castle was a shorter visit as we could not explore inside. The interior of the building is in a dangerous state of disrepair, although the outside still looks solid. It’s really too bad it wasn’t kept up, because it looks like it would have been a fine home. We certainly understand the attraction for the Outlander producers to use the site to represent Lallybroch. As Dan has mentioned at least three times today, this is the first site we’ve seen that you knew where you were the moment you saw the building. I wonder if Dan is going senile…?

About five hours later we returned to Edinburgh. You know that point when you’re so hungry you don’t know what you want to eat and therefore cannot decide on what to eat? Yeah, here, that resulted in eating Mexican food in Scotland. The Mexican food was really good, despite not exactly fitting into our Scotland theme.

On our way to find food, we happened to walk up alongside the Edinburgh Castle terrace. You know, the one surrounding the esplanade where the Tattoo is performed? Yes, that one. You can’t really appreciate the engineering of the bleacher support structures until you see them hanging over the rock face. Dan’s comments: “Last night whilst everybody in the audience was swaying in unison while singing Auld Lang Syn (sp), I was gauging the deflection in the floor to see if a resonant structural failure was imminent, while simultaneously looking for an exit route, be it over or through women, children or old people. And there were LOTS of old people.” 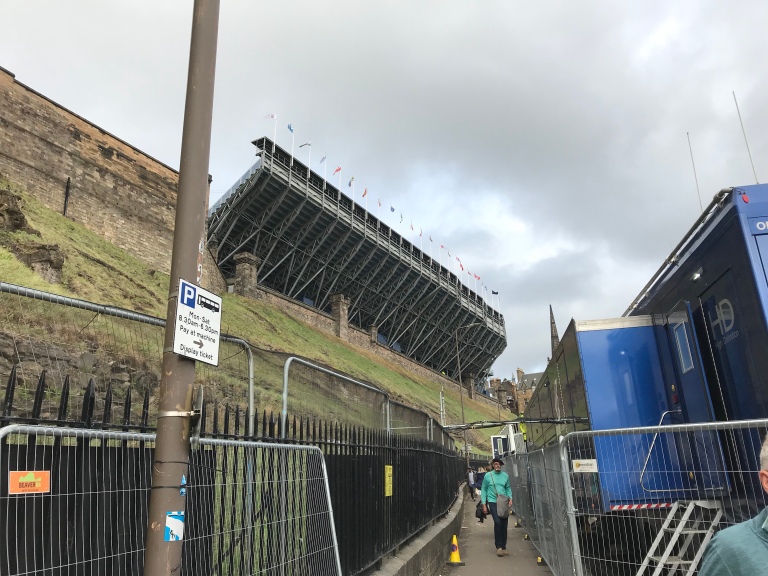 Now we have an few hours before our next show (Rachel Parris’ A Musical Comedy), so thought it best to take the opportunity to write this blog. Especially appropriate since we won’t get out of the show until Midnight, and we drive all day to our next destination tomorrow.

We promise not to have any more noteworthy adventures today. But if we do, I’ll tell you about it tomorrow.