Our second try at getting to New York started off pretty uneventfully. That’s good, considering how unbelievably early we had to get up for our flight. I should clarify that “uneventful” does not mean “unusual”. When I went to check us in yesterday for our electronic passes it wouldn’t send Zak’s passes, saying only that he had to present himself at the airport check in counter. I’m thinking, What? Why? Should I be concerned? I called Westjet and she said not to worry, that Zak had been randomly selected to go through more security clearance. He was checked in, but needed to show his passport to get his boarding passes and had to get a more thorough pat down at security. Which also meant we had to show up half an hour earlier than we were planning to. Needless to say, all except Jarod slept on the first leg of the trip.

While waiting to board we were joking around and somehow the subject of what happened if we couldn’t land in Calgary came up. Holding patterns and Die Hard were discussed. Sure enough, on approach to Calgary we ended up in a holding pattern for a little bit waiting for other flights to clear due to fog.

So, since the last time we went through Toronto Pearson they have mostly completed the US departures area. A year and a half ago everyone travelling to the US was corralled in one end of the main check in area and then each flight was escorted in a line through the terminal through US Customs. Now we go through three stages to get to the gates. No problem there, all electronic, even with Zak’s So-So-So-Special status.

We had supper at a restaurant called Nobel Burger Bar, which actually has tablets on pretty much all the tables in the area that you order your meal from, pay at the debit/machine at the table, and they deliver your order to your table. It was pretty neat, but really busy. The whole area is really busy. Even the bathrooms. Then we had some fun getting moved around between gates (they couldn’t seem to make up their mind) and our flight was delayed about an hour. Ah, well. As long as we get there.

We got there; an hour and a half late, but we got there. Not complaining though. Better to arrive late than not at all, especially since they had to switch planes due to mechanical failure. And they warned us and apologized as we were leaving and throughout the flight that turbulence was expected, but the pilots did a fantastic job avoiding it because I didn’t feel a thing.

Our driver was awesome. He picked us up in this fancy SUV. Our hotel is great so far; the front staff are really friendly. It is becoming ever more common for people to react to my name, and the staff here didn’t fail me. I’ve learned to play along and enjoy the ride. Apparently we’re likely to see celebrities here, so I’ll have to pay attention. 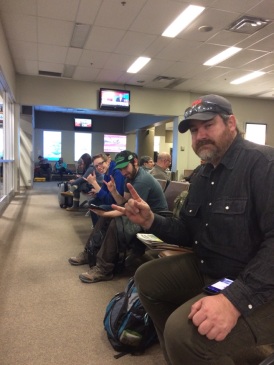 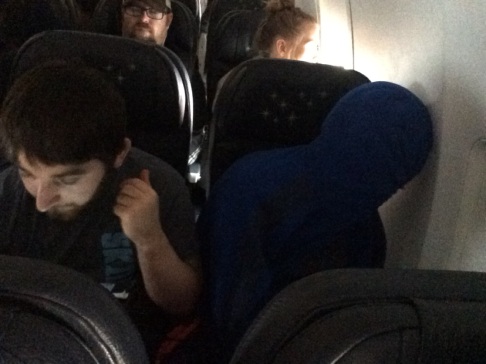