Another not-long-enough day. Finally got out of the hotel for breakfast around 10:30. We went to a little place called Morningstar Restaurant, a diner about halfway between our hotel and our destination for the day. The place was busy, but we got there just after 11:00 when the menu said breakfast was served until. So we thought we had missed our opportunity for breakfast fare, ordered lunch items instead, and then saw that others were still getting breakfast fare. Sigh. The food was fine, but nothing special about it.

We then walked another half hour along Central Park West to the American Museum of Natural History. Once again, in my opinion, we did not get there early enough. We did get to see the Dinosaurs Among Us exhibit (dinosaurs = birds) and the Dark Universe space show (Neil deGrasse Tyson talking about dark energy, dark matter, and the expanding universe), and we saw most of the related areas, but we did not get to adequately explore the anthropological areas. We checked to see if there were any dioramas like those in Night at the Museum, but no luck there. Did a little shopping in the store and then got kicked out.

A conversation earlier in the day about favorite foods revealed Zak’s partiality for noodles, ramen in particular. A quick Google search found a 4.5 star rated place called Jin Ramen about a 10-minute walk from the museum, so we gave that a shot. Turned out to be an excellent choice! The soup was really good, the appie gyoza were wonderful, the service was perfect. That’s Jin Ramen on Amsterdam Avenue and about 83 Street. Highly recommend it.

A cab ride back to the hotel so the boys could do their homework (at the last minute, of course). Dan and I went for a short walk around about 12 square blocks in search of Halls (Dan has a bit of a cold), Ben and Jerry’s New York Super Fudge Chunk, and some chips for the boys. No problem with the first and last. Went to an actual Ben and Jerry’s store on 44th and 7th and had zero luck there; although Dan did get some ice cream and I got a B&J glass and a Brookie (chocolate chip cookie on top of a brownie). The lady said the B&J at Rockefeller is likely the only place I might be able to get my ice cream. Well, we’re not going that far tonight, but we’re going by there Thursday, so maybe I’ll get lucky. Did I mention the hotel staff here are pretty awesome? Yeah, I’ve got one or two of them keeping an eye open for my New York Super Fudge Chunk too. For the life of me I cannot figure why that flavour is suddenly so hard to get… 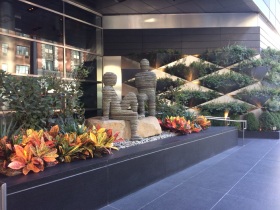 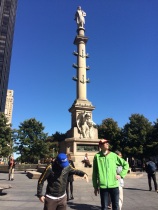 That’s how big a wooly mammoth is.