It’s horseback riding day! But that’s later. We’ve got all day to get through first. Finally we were able to sleep in a little bit, which was so nice! Or at least it would have been. Five o’clock in the morning my cell phone rang, waking me up; it was one of those fraudulent automated calls trying to tell me my debit card had been deactivated for security purposes and to enter the card number if I want to re-activate it. I was still half-asleep, but not that out of it. I was annoyed though. I hung up and called my credit card company directly to let them know about the call. Turns out they had just gotten another call minutes before mine from another card holder about the same thing. They confirmed it was a fraudulent call and after a few appropriate security questions confirmed my bank cards were just fine and I could go back to sleep. Which I did — until another number I didn’t recognize tried to call me again at 7:30; I ignored it that time. Then I got up for an appointment I thought I had at 8:45 a.m. I didn’t realize until after I got there that I forgot to set the time zone in my calendar when I entered the appointment so it didn’t adjust when we changed time zones, so I was an hour early for my appointment. Had a little nap poolside while I waited for that, which actually was kind of nice.

Jessica and I finally managed to go for breakfast and then made our way to Luxor to go see the Titanic Exhibit — which is fantastic! I highly recommend seeing it if you’re ever in town. It is so poignant at the end to see the lists of survivors versus losses divided by classes.

Late lunch before getting ready for our sunset horseback riding adventure. Jeff from Wild West Adventures picked us up about 4:00 that afternoon — exactly when they said they would. We had a group of 13 people representing three commonwealth nations — Great Britain, New Zealand, and Canada –and Wyoming and Florida. A 45-minute drive out of town brought us to the working ranch from whence Caesar and Himey saddled us up and guided us on a hour-and-a-half ride through a dry Nevada valley. For such a desolate place it is remarkably beautiful, and we were not disappointed with the sunset!

We were also not disappointed with our guides, who were very amenable and informative. Himey is Caesar’s dad, and he was the strong, silent type, who chatted just fine when approached but otherwise led the pack. Caesar rode up and down the line talking with each of us, very outgoing. Jeff stayed behind at the ranch cooking supper: steak, baked potatoes, corn on the cob, baked beans, and Apple pie for dessert…it was wonderful! We ended the night with learning how to rope a metal stationary steer. It took some doing, but most of us did eventually get it a few times before we were driven back to our respective hotels. So glad Jessica found this activity! Nevada is hot. 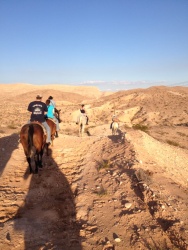 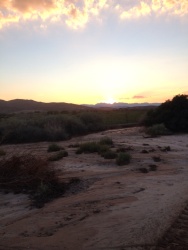 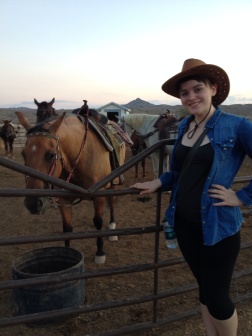 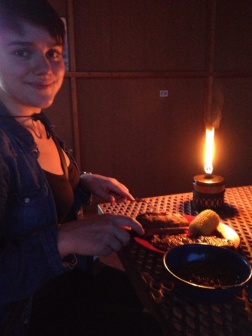 I rated this place 4/5 – Definitely worth the stay!
Fantastic hotel! Check in was quick, bag check was reasonable, our room was clean and comfortable, there was free wifi, and the restaurants were available exactly when we needed them. The Grand Buffet left a bit to be desired, but the Aurora fit the bill nicely. Will definitely come again.