HELLO PEOPLES!! Well we took like a half hour just to walk through the airport finding the customs people and everything, AND WE DIDN’T EVEN GET A TIMMIES!!!!!! JUST A STUPID STARBUCKS!! But I just found out that my Mp3 is in my jacket… which is in my suitcase… which is on the airplane… So that means no music all day!!!!! WAAAH! But ya… hmm well not much has happened because well it’s only 7:05, so we’ve only been up for like 3 hours… hmmmm ya the sandwich at starbucks was not good at all. It was all dry and I was like WHAT THE HECK! THIS IS DRY! And the banana bread was REALLY sweet… too sweet…. Oddly sweet… Well ya… still don’t have my scissors back… Don’t think I’ll ever have them back again… L But ya… so that’s it so far… Oh and today I’m in charge of the camera! So expect awesomeness from the pictures today!

Translation: My messages from now on will be in bold to increase visibility.

So we got off the plane and decided that we should find our gate before we get lunch. So we find out our gate number (which was gate G17 by the way) and we see the signs saying Gates CDG so we follow the sign and while we’re walking we see a giant SNOOPY statue! So we’re like “After lunch we come back and take a picture and then we go on the plane.” So we keep on walking, following the signs… we walk for another ten minutes… we are still following the signs… Gate G 2-10… another 10 minutes… Gate G 10-22. So we follow it.. another five minutes before we get there. So we think let’s find a fast food restaurant to eat… there are two in the area… Out of like 50. Then we hit a wall… we are on the complete opposite side of the airport… 10 mins until we have to board… WE DIDN’T EVEN GET TO TAKE THE PICTURE OF SNOOPY!!!! And the Quiznos we got food from wasn’t very good… THE TURKEY WAS SLIMEY!!!! But hey… like 3 hours till we’re in Orlando… BUBBA GUMP SHRIMP, HERE WE COME!

Okay, so Jessica has so eloquently taken care of the above incidents of the day that I will fill in the blanks with a few other things. While we were waiting to board the plane in Edmonton this family came along with three kids: a teenager and two toddlers. Of the toddlers the little girl was maybe three or four years old and the little boy was maybe two or three years old. Well, this little boy was the cutest thing ever! He was stocky with a round face and big eyes and just solid. He was walking around and pulling his own little suitcase and pulling the handle up and down and he was just adorable. Just before the family left to board their plane the little girl was playing with him and out of nowhere started hugging and kissing the little boy. He just took it stoically and then kept about his business. And then as they family called him to come along he pushed the handle on his suitcase down and his dad asked if he wanted him to take his suitcase for him and he just said, short and sweet, ‘Yeah.’ All four of us were giggling by this point enjoying the show, as were a few of our neighbours. It made my day to that point.

Leave it to the little kids to continue making my day. On the plane from Minneapolis/St. Paul to Orlando we were sitting behind another couple of kids: a six-ish year old girl and a three or four year old boy.  They were travelling with their grandparents. All through the flight their grandmother (a really young grandmother, I must say!) was talking with them about Disney World and the little boy was so articulate it was just adorable. Near the end of the flight there was this wonderful conversation about candy that went something like this:

Grandmother:  “How about I hold your candy for you.”

Grandfather: “How about I hold your candy for you?”

Grandfather: “No, I wouldn’t.”

Well, Jessica and I couldn’t help laughing out loud at that one. Again, the little boy made our day.

So we get off the plane in Orlando and we’re just psyched that we’re finally there. We’re walking through the terminal (another long walk) to the baggage claim area and all of a sudden Dan starts laughing (where’s the camera when you need to catch a guy with a smile!) and he points out the iPod vending  machine. Yes, that’s right. An iPod vending machine. It had cell phones, GPS, iPods, you name it. We’re uploading a photo here. We got a kick out of that.

On our shuttle from the airport to our hotel Dan and I were observing the scenery and, just as I was thinking the same thing, Dan mentioned how Orlando could easily be compared to Montreal. Except for the palm trees. And the satellite dishes that point straight up instead of to the side.

After we checked in to our hotel we left immediately for Bubba Gump Shrimp Restaurant. Getting there involved going through security at Universal Studios, which almost stumped us. You’d think we got through US Customs without any trouble whatsoever that getting into Universal Studios Citywalk wouldn’t be a problem. Apparently they have a rule about no obscene or swear-laden material in Universal Studios. Apparently the kids (both kids) Ragged Ass Road shirts were almost enough to keep us from getting into Universal Studios Citywalk. We had to explain that the shirts referred to an existing road in our home town. The head security guard came by, took one look at the shirts, covered a smirk, and told us to go ahead. Huh.

And finally, at Bubba Gump Shrimp we got the coolest stuff, including some blinky plastic glasses.

That’s really about it for today. Universal parks are on the schedule for tomorrow.

A Mickey Mural at Orlando Airport 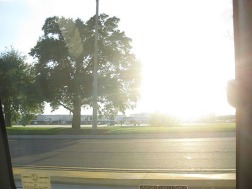 A nice shot by Jessica 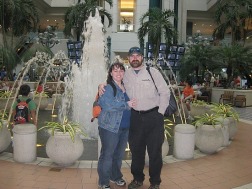 Adelle and Dan at the Orlando Airport

Bubba Gump Shrimp sign -No, this sign does not have all the different kinds of shrimp Bubba talked about in the movie.

Edmonton International Gate Starbucks -After all the effort to get through customs all they have on the other side is a lousy Starbucks!

Jarod and airplane seatbelts -Yes, it’s true…Jarod gets a kick out of the sound of the seatbelt clicking into place. Repeatedly.

Our driver at the Orlando Airport -Notice the sign with my name on it?