Today was our day to move to Disney World. Our Ace Luxury driver was really nice and talkative. We took advantage of early check in at Port Orleans Riverside, had our luggage stored, and took off straight to Epcot by bus. Of course when we got there one of our children almost didn’t make it through security again. We all neglected to make note of Jarod’s new bag bearing the Universal Studios logo. At security they check everyone’s bags. The security guard said nothing, but indicated with his facial expressions his ‘displeasure’ with the Universal logo getting past security. Of course I apparently didn’t do it right either when I tried to let him look in my bag while it was still around my neck. I actually got a verbal reprimand for not taking it off.

On the way to our first stop Jessica was going to stand in line to get Daisy’s autograph and photograph only to realize we forgot to bring pens. By the time we purchased a pen Daisy was gone. Our first stop (none of this was planned, by the way) was to get the Fast Pass for Soarin’, after which we went to see Figment at the Imagine pavilion. That show starred Eric Idle as the Professor, which seemed promising, but it really wasn’t quite up to our expectations. It was only mildly entertaining. We then moved on to see Honey, I Shrunk the Audience, starring Rick Moranis and the cast from Honey, I Shrunk the Kids movies. This was slightly more entertaining than Figment. It was a 4-D experience that included physical special effects, like ‘feeling’ the mice scurrying under our feet and the dog sneezing on us.

We went for lunch at Le Cellier at the Canada pavilion at World Showcase. It was modeled after the Chateaux Frontenac in Montreal. We sat in the Alberta section. The meal was really excellent, the staff was all Canadian and provided excellent service, and we even met our local Yellowknife representative, Jessica. That was pretty cool.

We’re really starting to wonder about Florida’s obsession with turkey legs, though. Both at Universal Studios and here at Disney they sell turkey legs for snacks. And they’re not small turkey legs, either! Their Flintstones huge! Any thoughts on this? Dan swears he’s going to try one before we leave. I’ll let you know how that goes.

The best ride of the day was next, Soarin’. This was a simulated hang-gliding experience over California. The coolest part was when we could smell the oranges flying over the orchard!

We wandered to the other side of the park, stopping along the way to do some shopping and cooling off in the stores as the weather was the hottest and muggiest day yet. During this time we caught Chip and Dale signing autographs, so Jessica and Dan got in line for their signatures and a photo only for them to ditch the fans before Jessica could get to them. Her heart was broken. Too broken to consider waiting around for them. She did understand, however, that the cast members were probably suffering from heatstroke.

Our goal in this walk across the park was the Mission: Space ride. We chose the ‘lite’ version of this as there were several warnings that the regular ride was ‘intense’ and figured it would be safer to try the lite version first. It was pretty cool flying to mars in the simulator, but we were all pretty much in agreement that we’d probably be okay in the intense ride. However, at this point I was feeling a little heatstroke myself and the rest of the family didn’t seem to want to go on without me, so we moved on to the next ride.

Which was the Universe of Energy and involved a slow ride through Ellen Degeneres’s dream about where energy comes from and how it is used. It was a funny story, but only an okay ride with not bad animatronics and a dinosaur that drooled on Jessica. There was also an animatronic Ellen, probably the only one in existence.

From there we mosied over to Space Ship Earth, which was actually pretty cool. It was a slow ride from the past into the future and included some computer graphics we got to play with. It took our pictures in the car and superimposed our faces onto cartoons about the future. The animatronics in this ride were absolutely spectacular! Their movements and costumes were totally believable and natural looking. At the end we got out of the cars and got to play with futuristic type games before leaving. It was pretty fun.

Then we decided to walk around World Showcase and sample some of the foods being featured for the food and wine festival that is taking place. We were getting pretty tired by this point, though, so we didn’t end up trying very much and decided to just finish walking the showcase and go back to our hotel. We ate a little bit at the food court, went to our room, got our luggage and groceries delivered, unpacked, wrote this little ditty, and went to bed somewhat earlier than previous nights. All in all a rather slow day, but we needed a slower day today anyway with all the excitement so far. Time for me to sign off and let Jessica type her entry. She’s been hovering over me for a few paragraphs now. Later!

HELLO Peoples! From now on I will be calling my part of the blog Juice’s Corner. So let me begin:

Well I got an Autograph book today. And within the first like 10 mins I saw Daisy… BUT I HAD NO PEN! So I couldn’t get her autograph. Then I saw Chip and Dale! But they bailed on me! Selfish, selfish, selfish. So the first ride we went on was the Soarin thing, IT WAS SOO FUN! It was like we were flying! The rest of the rides were okay, but Mission Space was REALLY FUN! And I got more gifts today, I wanted to get myself this AWESOME Minnie Mouse Sweater, but it was like 50$! Dude! What the heck! So instead I got an AWESOME Goofy Watch… by the way, according to my Goofy Watch it is 11:14. And I also got a Mickey Bag, It is awesome if I do say so myself. Oh and by the way, Sydney’s Gift is not Sydney’s gift anymore… too cute and soft, so I got her something else… This one is not soft… But Really cute… I think… can’t really remember what it is… it’s still downstairs in the general store. Oh and I got a Goofy hat! Only 20$!! At the round the world food festival thing I had a perogie… 1 perogie for 4$…  RIP! So I had some breadsticks from the food court at my hotel… THEY WERE THE BEST EVER!!! Logging off Juice’s Corner… NOW!

PS Monique I hope you get the Juice’s Corner joke… If not, here’s a hint “I will puke down your back”
PPS Today I published the blog entry 🙂 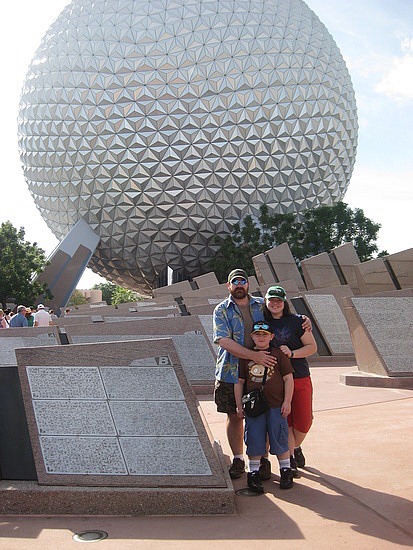 Epcotness The family in front of the golfball at Epcot

Le Cellier-ness Me and Jarod at Le Cellier, the canadian restaurant there 🙂

I can’t believe…
that Jessica, you went to a WORLD food festival and ordered a perogie?!! Why not a samosa, a pad thai, an empanada or at the very least a little Iron Chef worthy morsel. No..she has a perogie. I am desolate.
On the other hand sounds like you all had a lot of fun on the rides. I think I would really like to try the soaring ride.
And since Sydney’s gift sounds so cool and is no longer hers anyway…can I have it?
And next time those *@+& chipmunks bail on you, trip ’em!
Just kidding… have lots of fun.
Love Liza & Zoe
(PS if you really want a picture with a couple chipmunks, just come over here when you get home. Zoe and I are both short and cute!)
Love From Zoe Raemer, on Oct 28, 2009 at 01:46AM

Re: I can’t believe…
After ‘Iron Chef of YK’ how could you possibly expect her to be interested in any other so called ‘worldly’ food. She’s already had the best, that you guys all made!

PS: One of you is definitely cuter than the other in how she trys to steal the glory. Ain’t naming names though… (shorter too I’d say)