The day started out typically and then it was a little bit of a roller coaster. Mom and I went for breakfast at Chestnut Cottage in Port Angeles. Once again, Tripadvisor did not let us down. It was a lovely little place with absolutely fantastic food, service, and prices. The pastry that was included with my crab omelet was fresh made in house and was just bursting with mixed berries. Mom’s apple walnut french toast was huge; she ended up taking all day to eat it in the car.

Once on the road we followed the GPS’s instructions and took Highway 104 south; we didn’t even get to Hood Canal Bridge when traffic came to a standstill. That’s when we saw the sign telling us to tune into an AM station for traffic reports, which subsequently warned us of the opening of Hood Canal Bridge taking place that morning and to expect delays of up to an hour. We decided to turn around, ignore the GPS, and take Highway 101 south instead. The GPS didn’t like that and kept trying to turn us around or get us to use inexplicable back roads, often implying we were not already on Highway 101 when it was blatantly clear from the road signage that we were in fact on Highway 101 southbound. This route did end up taking a little more time than originally planned for, but it was the unexplained stalling of traffic outside and going past Olympia that was annoying. Then getting around Tacoma to make required stops at Walmart and Home Depot got a little ridiculous, too, but at least we were successful at finding two-thirds of the items we were looking for.

After leaving Tacoma the driving got much better. We didn’t have any real trouble getting to Snoqualmie Falls, which were absolutely gorgeous, even in the rain. Would be nice to go back there and explore a bit more. We continued on, though, to North Bend and had supper at Twedes Diner. The significance of this diner will likely be lost on most of you, but this is the diner used in Twin Peaks which is famous for its coffee and cherry pie. We did not partake of the coffee, but I did partake of the cherry pie. Honestly, it was no better or worse than any other cherry pie I’ve ever had, but it was still fun to do. Of course, the funniest part of our visit was the giggling my mom started when she unintentionally referred to the model trains lining the walls as Choo-Choo trains. I think you have to be a Lafrance to understand.

As it was later in the day than expected, we drove non stop the rest of the way to Spokane. Aside from the occasional downpour, one short stretch of construction, a really gusty section of road, and tumbleweeds from apparently out of nowhere, the drive was quite pleasant. We even got to drive under one of the most brilliant rainbows I’ve ever seen.

We arrived at our hotel about 9:45 pm. We stayed at The Davenport Hotel and my mom thought I must have won the lottery or something when she saw the lavishness. Burst that bubble pretty quick when I told her how inexpensive it actually was. Still not sure she believes me, but I can prove it when we check out tomorrow.

Wildlife sightings: one flock of small ornithoids. Does road kill count? I saw a dead rabbit on the side of the road… 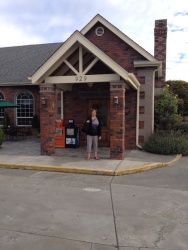 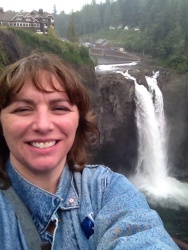 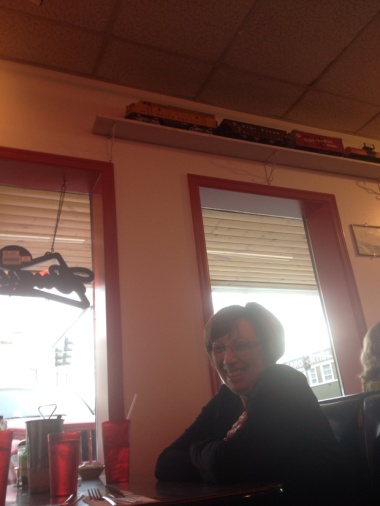 Mom and her choo-choo train

Driving Under the Rainbow 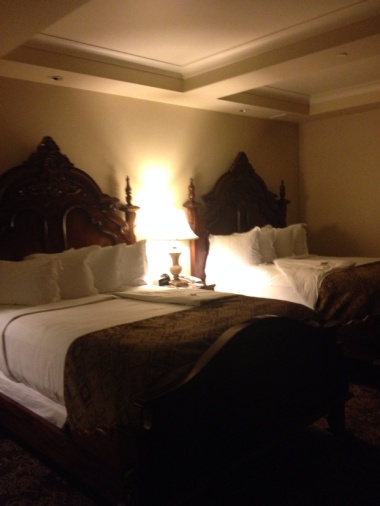 Our Beds for the Night