Today we left Ronnie and Angie’s fine establishment at Brookford B&B, where there is no doubt that they deserve all of the accolades, certificates, and awards that they’ve received. They are wonderful hosts, with a beautiful property, and damn can Ronnie cook a good meal! Check them out if you’re ever through Dumfries and Galloway:

At the recommendation of our Scottish Immigrant friend John McLean, we visited the Museum of Lead Mining in Wanlockhead. Besides being the highest village in all of Scotland — I know it seems unlikely given it’s not located in the Highlands, but it’s true — it also boasts a wonderful little museum about the history of lead mining in the area, which is why the village exists at all.

The museum itself provided a history from the mines’ beginnings in 1710 all the way through to their end in the 1930s, which came about because of the Great Depression.

They also offered a tour of the Lochnell Mine, which was re-opened in 1974 specifically to show visitors. I admit, I did not think it through before going on the tour, we just automatically did it, so it wasn’t until we were inside the mine that I realized WE WERE INSIDE AN UNDERGROUND MINE! Being usually rather claustrophobic in underground situations, I usually require mental preparation to enter them. I must have done that sub-consciously, because I actually handled it just fine and even enjoyed the tour. We didn’t go very far, actually, although our guide, Margaret, did point out that they were working on extending the tour to go another 150 yards.

Along the way, Margaret showed us the galena, the really dirty stuff that I just can’t recall the name of, how they would blast sections of rock to reach the galena, and the bucket winch they would use to send men into the hole to retrieve more galena. This particular mine actually closed in 1861 because they couldn’t pump the water out of the hole fast enough to be productive.

It wasn’t until we were out of the mine that I asked her how far underground we just were, to which she replied about 120 yards. Glad I didn’t know that before we went in. Even Dan commented he was watching to see if I’d freak out in there. Then Margaret just had to also mention that the mine is shared with two different kinds of bats as well, and they sometimes can be ‘friendly’ while the tours are in there. Yeah, also glad I didn’t know that when we were in there.

Margaret handed the tour over to another tour guide (I’m so sorry, I have forgotten her name) to take us to the Straitsteps Cottages, where they’ve recreated how the miners homes would have looked in 1750, 1850, and 1910. As time passed, the living conditions improved dramatically. Of course, the single item that peaked Dan’s interest the most were the Victorian tea cups with moustache guards in them. 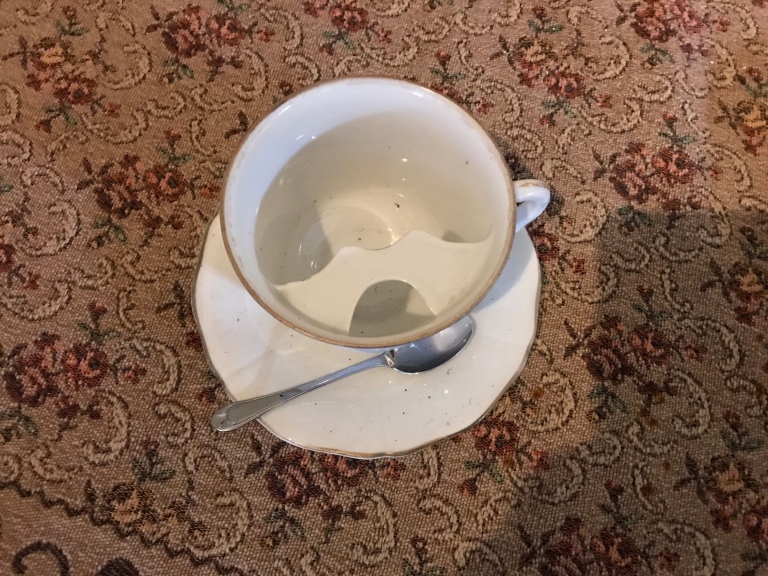 We continued on our journey today, and just to mix things up we decided to drive for about an hour and then see what Lady Sat Nav could show us for another site to see. There was a brief delay on the highway when a swan decided to go for a walk along the centre line. Our photos didn’t turn out, sorry.

Lady Sat Nav failed us this time, but Googlemaps once again saved the day. Castle Campbell ended up being the nearest option.

Our detour to Castle Campbell was actually pretty cool for being on the fly. It’s located pretty much in the middle of nowhere, on a narrow ridge separated from the Ochil Hills be deep ravines. On a clear day it must offer spectacular views. We wouldn’t actually know. As soon as we got there it was misty and foggy.

It’s a bit of a slog up and over a couple of hills, but actually quite worth it.

This is another site that is believed to have originally been a motte from as early as the 1100s, but the existing tower is dated to the early 1400s. At the time it was referred to as Castle Gloom (likely spelled differently), and may have been built for John Stewart, Lord of Lorn. 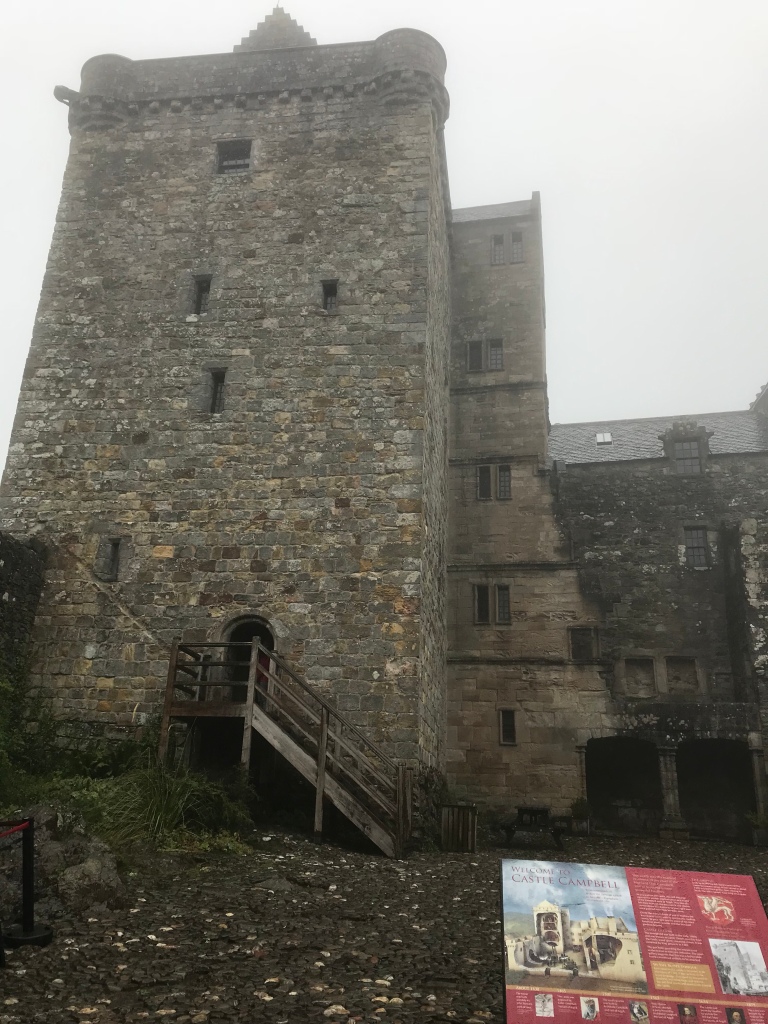 The Campbells came into possession of the castle through marriage around 1465, and King James IV granted Earl Colin’s request to change the name of the Castle from Gloom to Campbell.

The Castle was extended and renovated three times during the Campbell’s occupancy, until 1654 when Scottish Royalists razed the castle because the Marquis of Argyll allowed Cromwell’s British forces to use the castle as a base.

We toured the castle from the highest point in the tower down to the lowest point in the garden. Dan and a bird kept bumping into each other whenever he’d try to look out a tower window. The first time actually surprised Dan so much he squeaked and flinched. Can’t really blame him though, the bird literally flew into his face through the window, and at first he thought it was a bat.

We enjoyed this stop, as brief as it was, but had to continue on to our final destination: The Covenanter Hotel in Falkland. This is where my fellow Outlander fans should be collectively gasping in envy. For those who don’t know, The Covenanter was used for the hotel where Claire and Frank stay when they first go to Scotland in 1946.

Right outside the hotel is where Frank see’s Jamie’s ghost at the fountain looking up at Claire.

And just across the street is the store used for the store where Claire admires the vases through the window.

Now, here is where you can really collectively sigh: we are actually staying in the corner room where Claire would have been combing her hair while Jamie watched. Actually, the room looks nothing like what we see on TV, and the window Claire is seen at is actually the bathroom window, which is not accessible without reaching over the toilet and across a deep ledge, but that doesn’t really matter, now, does it! 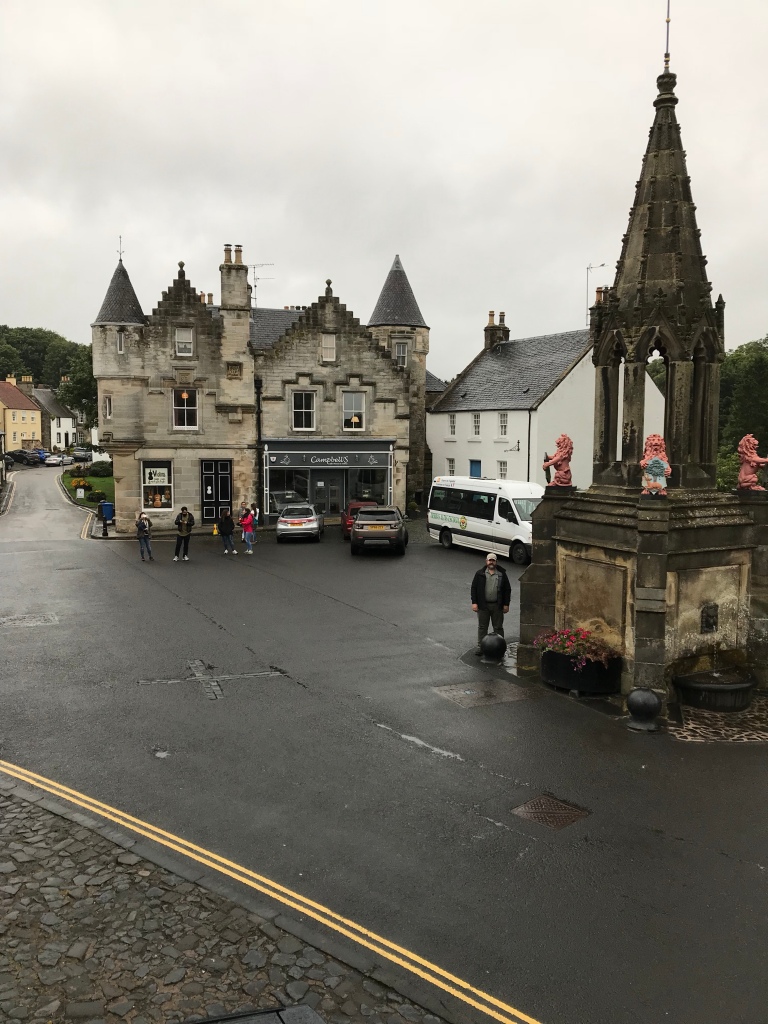 Outlander fix achieved, we went to the only place our hotel concierge was sure would still be open for supper this late on a Sunday: Wetherspoons at The Golden Acorn. The service was pretty great, and the establishment itself wasn’t too bad, but the food was awful. Apparently Wetherspoons is a huge chain in the UK, and Dan had heard of it referenced in Jimmy Carr’s comedy routines, but really, don’t bother going there.

One thought on “Tick Bait and Moustache Shields”